GALLERY
FUNCTIONS
GIG CALENDER
ABOUT US

Saturday 8th, Oct '22 KIDS IN THE KITCHEN
Touring again for the first time since the 80s, Kids in the Kitchen are back and shining brighter than ever on the 8th of October.
The line-up features all of the original members - Scott Carne on lead vocals, Claude Carranza on guitar & vocals, Craig Harnath on bass and Bruce Curnow on drums special. After rave reviews from their recent support gig on the Culture Club 2016 Tour, the band is more polished than ever and back performing at some of their most loved live music venues.
With their infectious brand of dance infused pop, catchy lyrics and energetic live shows, Kids in the Kitchen's star ascended quickly in the 80s.They became a household name with their double platinum debut album "Shine", achieving four Top 10 singles: Change in Mood, Bitter Desire, Something That You Said and Current Stand.
With charismatic front man Scott Carne at the helm, the band spearheaded the New Romantic movement in Australia, which dominated mid­ B0's pop. The release of their second album, "Terrain", which had two Top 20 hits - Say It and Revolution Love, saw Kids in the Kitchen tour the world and break capacity records at all major venues across Australia.
For a show that's bouncing with energy, fun and all the hits that you remember, grab your friends and get yourself along to a Kids in the Kitchen gig. You'll leave absolutely beaming.

Send me a reminder about this gig...
COMING UP

Saturday 20th, Aug '22 The Chantoozies plus support “Standing Room Only”

Near the corner of Chesterville Road. Plenty of free parking. 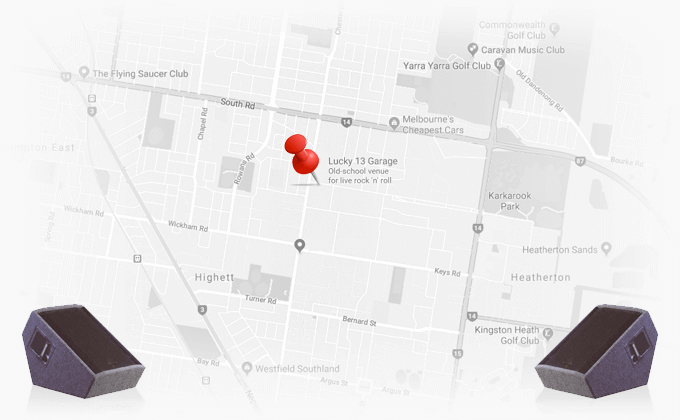 At Lucky 13 Garage you’ll get a friendly, down to earth atmosphere for a great night out. As well as a great sound system, large sized dance floor, raised stage area, intimate lighting for our patron area’s and a huge outdoor area.